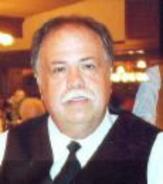 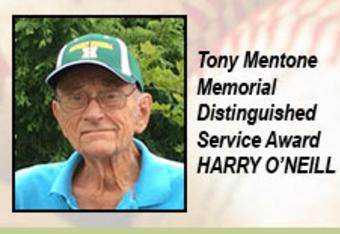 ​​​The Anthony "Tony" Mentone Memorial Distinguished Service Award is awarded annually at the Southern Connecticut Diamond Club's Hall of Fame Dinner. The recipient must have contributed to fostering and promoting the game of baseball. The individual must also have an impeccable reputation for integrity and dedication to the community and the American way of life.  The recipient of the award is considered to be part of the Diamond Club Hall of Fame.

Anthony F. Mentone spent his lifetime helping people, both young and old, He began umpiring at the age of 18.  He is credited with helping to create the Southern Connecticut Diamond Club.  He served as Former umpire-in-chief for Hamden Fathers Baseball Association and in 1991 received the Andrew Gassira Memorial Umpire of the Year Award. He was a member of the Greater New Haven Umpires Association since 1963, serving as its president, and later as its sub-varsity assignor. He also umpired at the Eastern Regional Little League Tournament in Bristol, CT. He was a member of the National Babe Ruth Umpires Association.

He spent many years coaching Little League in the Hamden Fathers’ Baseball/Softball Association, serving as their president for five years. He also served as Coach for the HFBA All-Star Team. In addition, Tony helped to found the Challenger League, a baseball league for children with special needs. In April, 2010 the Snack Bar at Bassett Field
was named the “Tony Mentone Snack Bar."  He also served as umpire in chief of the Hamden Umpires Association.

He went on to become involved in Connecticut District 4 Little League, serving as its treasurer and rules interpreter before being named an Assistant District Administrator. He was named an Umpire for the Eastern Regional Little League Tournament (1998). He also served as Umpire in chief for the New England Regional Girls Softball Tournament. He was named a Professional Sports Instructor  for the National Youths Sports Program at Yale (1999).

Mentone became an assistant baseball coach at Hamden High School, where he worked with the freshman team. and later, when his health would allow, became a volunteer coach at the high school.

Tony was a former vice president of the Greater New Haven Diamond Club before its hiatus in the 1990’s. For the past decade, he worked with other former members to revive the club, renaming it the Southern Connecticut Diamond Club.

In addition to his work in the local baseball community, he was also an active  volunteer, always looking to help others. He was a former local Hamden councilman, a member of various local organizations, including  Civitan and Unitas, and was known to have organized several fundraisers for friends in need.  He was a volunteer Hamden High freshman football coach and the freshman girls basketball coach.

He passed away suddenly on October 20, 2009 at the age of 63. In his memory, the SCDC has instituted the Tony Mentone Memorial Distinguished Service Award.